So on Sunday my partner Anna showed up after two long months of separation to celebrate two even longer years of Bein’ a Thing.

She got me presents (does this drawing seem familiar?) and we cuddled in one of Pearson Intl’s gargantuan comfy chairs for a bit. 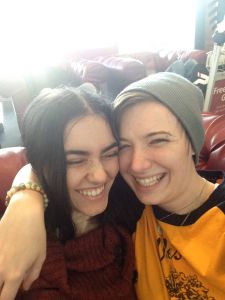 Needless to say we’ve been rocking out ever since.

This post is the last in the October Partnership Post series, and on account of not wanting to spend time and verbosity writing a 1000+ word post (on further account of Anna’s being here), we have instead decided to invite you all along on the magical adventure we had on this our second anniversary.

Join us. We’re hella fun to go out with.

The Ann(a)ual Museum Trip: A Peek At Our Nerdy Love 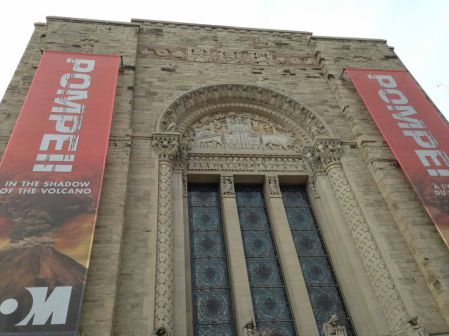 So every time the Royal Ontario Museum puts out a new exhibit and Anna’s in town, we’re off like a shot. Tuesdays are free admission for students, so we picked today for our ROMantic anniversary date. 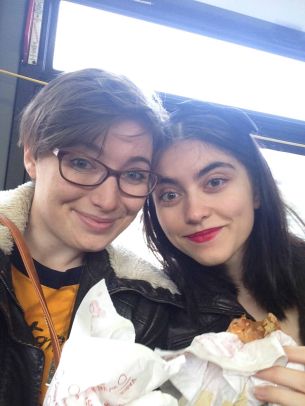 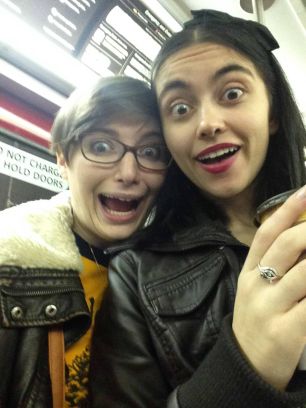 An additional shoutout for the large mint tea. As you can see, energy is on a high.

One quick subway trip down to Museum station later, we’re out front getting a good, mildly concerned look at the ROM’s lions before they’re tarped up for the wintertime. 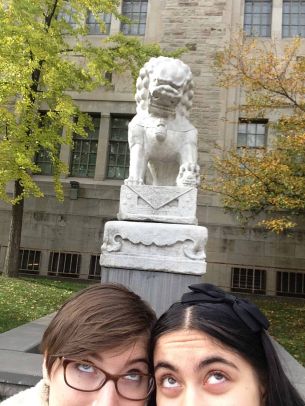 Around the corner we realize that Anna and I are not the only ones who make relentless ROMbunctious puns:

We go inside, grab our tickets, and head straight down to the exhibit. It’s open until January, so anybody who’s in Toronto before 2016 SHOULD GO. NOW.

Now, on a serious note–this exhibit was mindblowing and heartbreaking and awe-inspiring, like most of the ROM’s feature exhibits. It was handled tastefully (which is important when you’re essentially showcasing the deaths of thousands of people), and the tour guides are really well-versed and able to throw all sorts of extra information at you that’s not available on any of the plaques. It’s a worthwhile experience and it’s going to give you a sense of perspective on time and history and human fragility and a whole lot of other things besides.

But we decided to go for a slightly different angle.

Oh The Things You Can Do (In Pompeii):

Discover what dolphins and gladiators have in common (they’re scarier the closer you get). 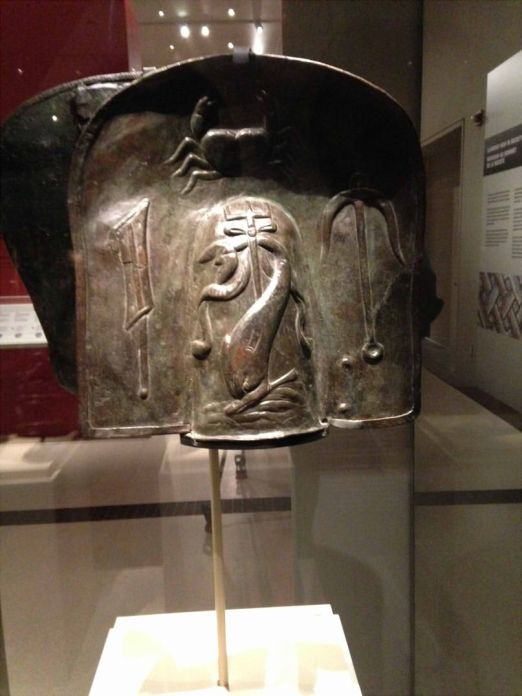 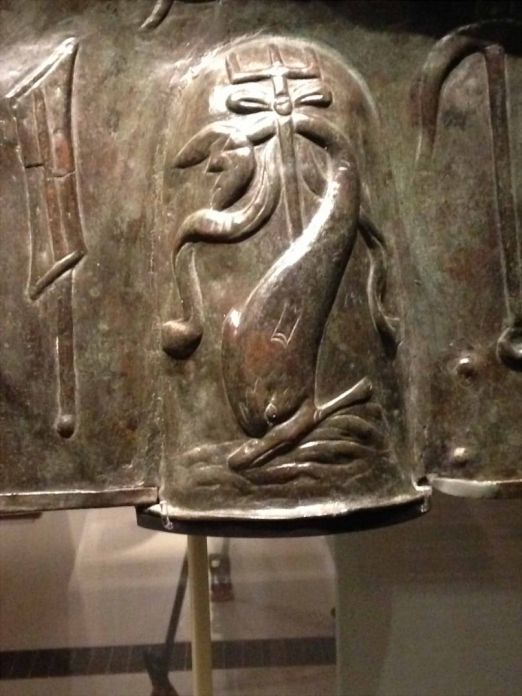 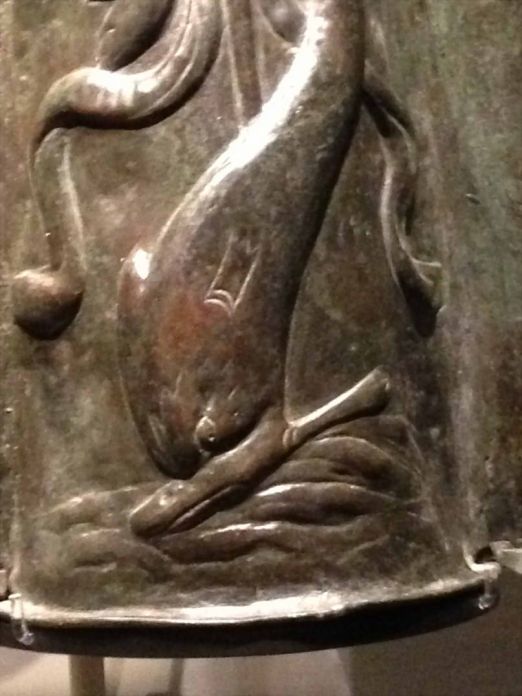 Exalt in the joys of being a Roman child. (The adult togas were about six feet too long for us to wear. We’re short.)

Find typos in the artifact information. (And then acquire photographic evidence of them. Three times.)

Try your own hand at being a mosaic artist.

Actually appreciate the magnitude of what happened at Pompeii because Mt. Vesuvius is a force to be reckoned with (but, as the info plaque told us, it’s still no match for glassware–glassware only yields to cupboards aflame.)

We are notoriously slow museum people–we can never just walk through an exhibit and give everything a cursory glance. We need to stick our noses right up against the glass and examine every inch of whatever’s on display and make conjectures about who what when where why how. Thank gods we’re both like that–it’s what makes us such compatible museum buddies.

Having said that, it does mean that it took us four and a half hours to get through Pompeii.

We only had time to see one exhibit after we were through.

So where do we go?

Apparently they’ve discovered a new kind of dinosaur out in Alberta, which is very exciting–they haven’t even decided on a name for it yet!

Also we saw the opportunity for making the same joke twice. (If it works, why not?)

It was just as funny the second time around.

The museum closed at 5:30, but the gift shop was open for another hour, so we perused the various items on sale. While we were there we found something all my fellow Glendonites will appreciate: 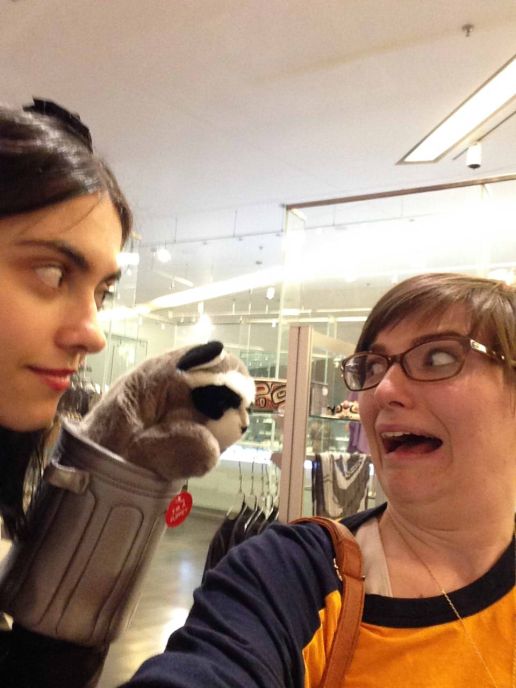 And started some early family planning:

But eventually we were kicked out of the gift shop, too. And also starving. Not wanting to wait the 45 minute commute back to campus for food, we took a quick stop at the Second Cup across the street from the museum for some really delicious and moist (and not oversweet!) carrot cake. 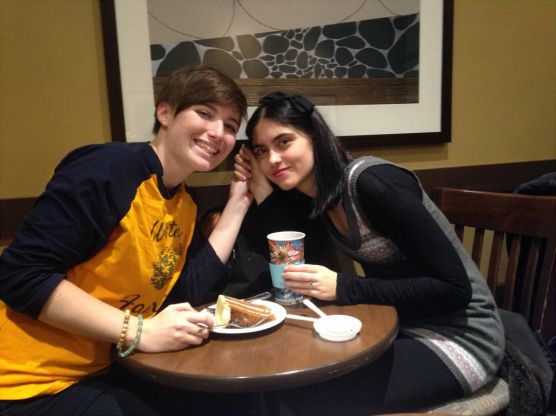 Once our tums were at least marginally full, we took the metro back up to Glendon and got ourselves some stir fry. And now, after a considerable struggle with Anna’s iPhone, we’re sitting here giggling at ourselves while I line up this post.

This is only day three of the Annaversary Trip, and we’ve got some really excellent events on the schedule for the next few days–we’re heading to a favourite Czech-style tea house of mine, and my best friend is bringing us to a weird and spooky-lookin’ art show on Friday. Halloween is likely going to be spent watching sarcastic vampire mockumentaries with my wonderful family. And then Sunday will roll around and Anna will have to head back to the States.

Like I said at the beginning of this post series, long distance relationships can be a real challenge. I wanted to give everyone a peek at what it looks like when the constituent parts of a LDR come together, even for a limited period of time–we make sure to catch up on all the fun we’ve missed in our time apart. It can be difficult to maintain, especially while balancing my student life, but it’s worth it for this.

And now, if you’ll excuse me, I’m off to go enjoy the rest of my Annaversary. Good night!

3 thoughts on “ROMantic ROMps in ROMpeii: My Annaversary at the Museum (October Partnership Post #4)”